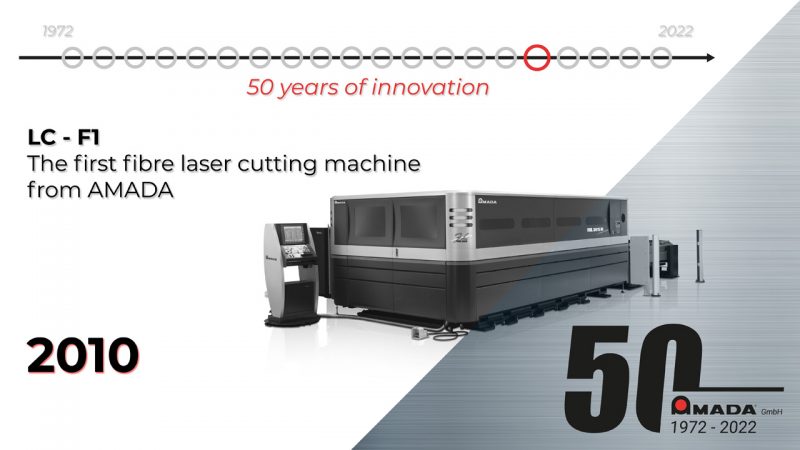 The future of laser cutting began in the fall of 2010. At EuroBLECH 2010 in Hanover, AMADA presented a new laser technology. For the first time, the FOL NT series was equipped with a fiber laser. AMADA won the MM Award 2010 in the cutting category with this new machine.
The fiber laser is also characterized by the fact that it does not require a warm-up phase and its energy consumption in standby mode is significantly lower. Due to the good energy balance, not only are operating costs saved, but resources are also conserved. In addition, by not using CO₂ as an operating material, the fiber laser contributes to lower emissions of the climate-damaging gas.

Compared to a conventional gas laser, the light wavelength of fiber lasers is only about one tenth. This technical feature makes it possible to couple the laser light into an optical fiber and transport it over several meters without loss of power.
Since the laser light can be directed in practically any direction via the fiber, the arrangement of the resonator in the area of the system is largely up to the user. Depending on the specific production environment, savings can be made in the space required – an advantage that should not be underestimated, even if the production area is to be reorganized. In addition, fiber technology eliminates some of the internal optics that would otherwise be required, which significantly reduces maintenance costs.